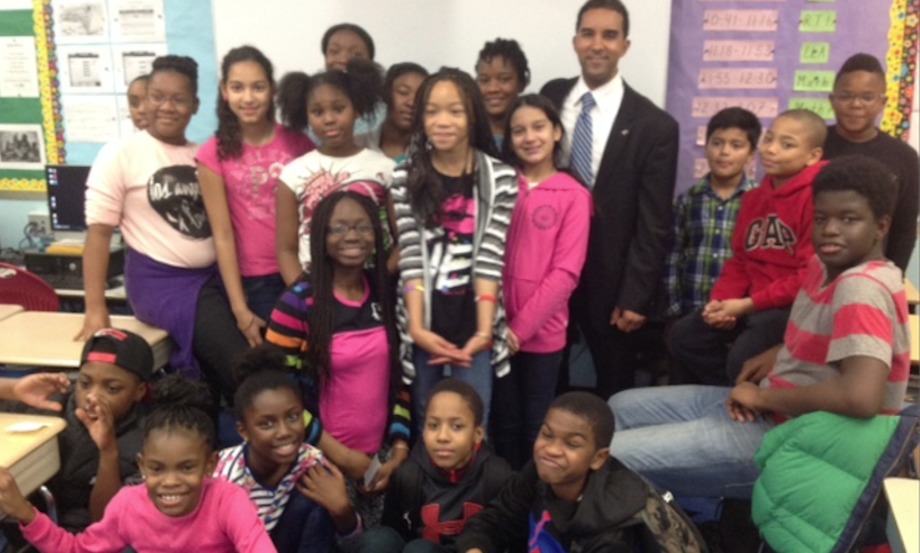 On Thursday, December 17, 2015, Mayor-elect, Richard Thomas of Mount Vernon visited the students at the Edward Williams School. It was delightful to experience the children's faces fill with awe and wonder when the Mayor-elect walked into their classroom. Everyone was surprised by the unexpected visit! Fellow JBFC educator, Anne Marie Santoro and I, along with our program volunteer, Naomi Allen, could hardly believe our eyes.

The new Mayor-elect came to visit the project we are implementing called "Every Voice Counts," part of the JBFC's "Reel Change" curriculum, as part of the Amazing Afternoons after-school program run by the Westchester Jewish Community Services (WJCS) in Scarsdale. For the past three years we have worked with the same students at the Edward Williams School, teaching them about writing, creative expression, and storytelling. Beginning in fourth grade, the kids experienced the beloved JBFC program, See Hear Feel Film. In fifth grade, they tried their hand at animation, participating in the JBFC's Minds in Motion program. Anne Marie Santoro and I are thrilled to continue to support their growth and development for the third year.

Mayor-elect Thomas was intrigued by the idea of teaching active citizenship to fifth and sixth graders. The students were equally interested in meeting the new Mayor-elect and asking him questions about the issues facing them as students and citizens of the city. A lively discussion followed. The future mayor talked about growing up in Mount Vernon, attending the public schools, and the challenges he faced. He talked about dreaming big and being smart. The students discussed issues of safety, such as the need for more fire fighters and police officers to stop crime in the community, and expressed their desire for more safe play areas. They spoke about the many challenges their community faces, and shared their dreams of the Mt. Vernon they'd like to live in.

Mayor Thomas challenged the students to create a film about their hopes for the city of Mt. Vernon. "Would you do it?" He asked. "This is a film class, right?" They all shouted, "Yes!"We began filming as soon as he left. He invited the students and their families to his inauguration on New Year's Day, January 1, 2016. The film will premiere at the ceremony. It is called A Message to Mayor Richard Thomas from the Children of Mount Vernon.

We are thrilled that the students will see their film and experience their voices counting. Mayor-elect Thomas has even promised that the Edward Williams School children would be his student focus group, and will be part of the voice of his new administration. Our collaboration is ending 2015 on a high note and is on track to begin 2016 with the students understanding that their voices do matter in government. We want to continue to give them experiences that strengthen their confidence, so they may express themselves with clarity and feel like powerful citizens and community members.