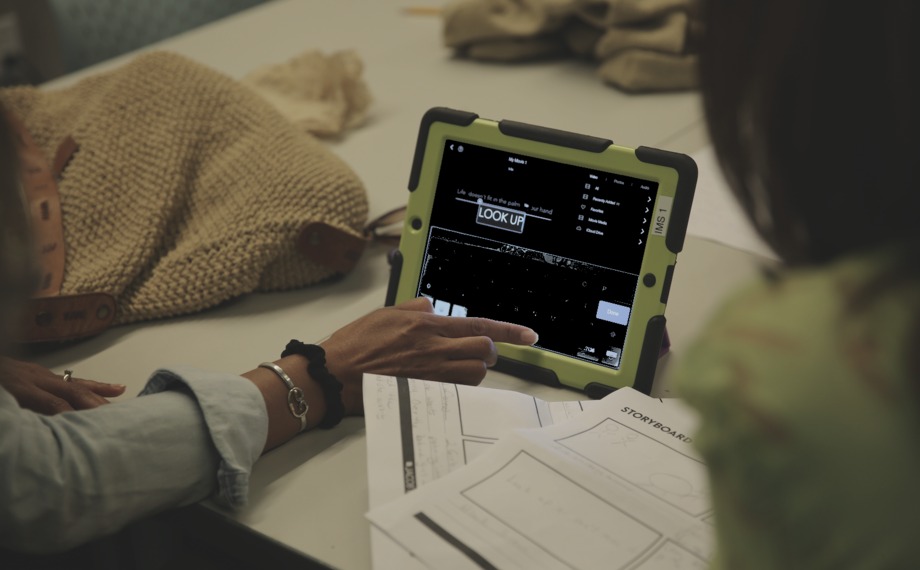 What a week! Today marks the final day of our Summer Teachers Institute, and it's been a fantastic time from start-to-finish. To tell the whole story of our professional development experience, it's worth beginning at the end. This afternoon we wrapped the Summer Teachers Institute with screenings of four shorts that are JBFC faculty-favorites: "Jon Jon", "La Royaume", "The Scared is Scared", and "Amar." Each one is a little film with a big impact. From an animated West Indian folktale and a French student animation, to a whimsical live action retelling of a 6 year old's story and a "cinema verite" mini-doc of a young boy in India; we ended the day with four small clips that span a wide breadth of topics and approaches to media-making. The discussions that followed each screening circled back to the idea that incorporating media packs a powerful punch. It has the ability to teach analytical and critical thinking skills and to inspire thoughtful creation.

The second-half of the week continued with three new strands: Focus on Nature, Reel Change, and Cinemania. Although the classrooms shifted and the topics changed, the spirit of collaboration and hands-on engagement continued. All three groups spent time both consuming and creating media.

The Focus on Nature strand, led by JBFC Project Consultant Tom Frankie, started Thursday off with a three-picture-project. Beginning with the question- How can you explore a setting in three images?- the teachers created playful, interesting, and moving media projects. Today they moved on to creating videos about "a day in the life of..." Teachers went out with iPads and told the story of one day in the life of a single subject. From bees to flowers to abandoned cigarette butts, each video offered an unexpected perspective on familiar things we often take for granted. The group spent the rest of the morning discussing the value of citizen science and how creating small video projects can become a significant contribution to scientific data. Empowering students to be thoughtful media-makers is important because it equips them with the necessary tools to be articulate and productive contributors.

The Reel Change strand, led by JBFC faculty member Brandon Shenkman also had a busy but fulfilling couple of days. On Thursday the group discussed persuasive media and got to work creating 30 second advertisements. Being able to create content is one skill, but understanding how content creates impact is an essential tool that often gets overlooked. This strand explored the value of asking students to approach the act of creating with an eye for audience and message. Today the group tackled a more ambitious project and made their own Public Service Announcements (PSAs). The discussion continued as the educators examined how media creates impact.

Our third strand, Cinemania, led by JBFC Faculty member Emily Ohara, was all about international cinema with a focus on adolescent experience and perspective. The JBFC's own Cinemania program for 7—8 grade students offers kids on the brink of young adulthood a space in which to engage with peers across borders, cultures, and even histories. In this way cinema is an invaluable educational tool. On Thursday the teachers in this group watched Truffot's famous film, The 400 Blows and then spent some time discussing everything from the genre of film noir to the value of being a witness to another person's life. Today, Emily screened several clips from the films Offiside, My Neighbor Totoro, and Moonrise Kingdom; and the group worked to create thoughtful lesson plans that incorporated everything from film vocabulary to space for personal reflection.

"The week has been both fun and rigorous." Wrote one educator; and we couldn't agree more. As summer begins to wind down, teachers across the county will be sitting down to brainstorm ways to make the next school-year exciting and productive. If the past week is an indicator of anything, we're confident that these engaged, dedicated, and ambitious trailblazers will be just fine. As always, we're grateful for their tireless participation.