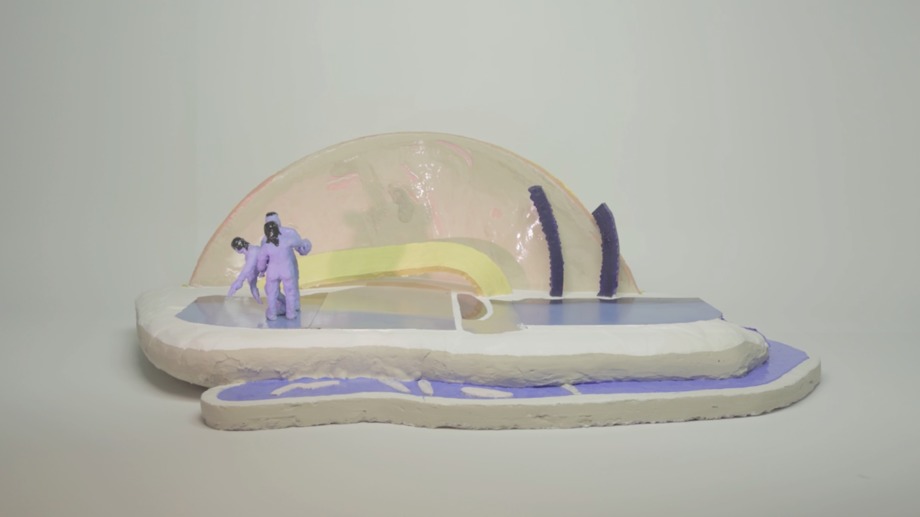 I started my project with the idea of making a stop-motion ballet. I became interested in pursuing a ballet, as it seemed the perfect medium to cohesively house a lot of ideas I was thinking about. Putting aside that I knew/know little to nothing about dance, I liked the idea of a ballet as it could hint at a narrative while getting away with abstraction and would allow me to dive into areas of interest of mine in set design, art direction, and animated movement.

The narrative I wished to portray in this was that of trying to find balance inside an average workday. Too often it seems that there aren’t enough hours in the day to achieve all the things you want: to feel like a human, take care of your physical self and body, to go to work and make a living, hopefully gaining something more out of it, and have time for exploring your mind, relaxing, and learning more about the things you’re interested in. I would do this by breaking the ballet up into three acts - morning, daytime, and evening, each focusing on one of these elements.

The first aspects I needed to pin down were A) a sound track, and B) trying to dive into an introit dance to figure out what kind of movement it would have. I got incredibly lucky on both these fronts, finding extremely talented people to help me with both! For the music, I worked with the incredible composers Ali Hernwein and Daniel McCormick to make a soundtrack that fit these ideas, and choreographer Hannah Garner and her dance partner Will Noling created the movement I would track to create in the animation. Being quite a novice in both areas of music and dance it was incredible to find these people who were not only great to work with, but brought their own style to it. As well, I’ve developed a new interest in dance I’m excited to explore beyond this project.

With these elements locked down I jumped into fabrication and animation. For this project I was extremely influenced by the abstract sculptures of artist Ron Nagle, and a ballet entitled Das Triadisches Ballett, developed by Oskar Schlemmer that came out of the Bauhaus Movement. With these inspirations in mind I wanted to place the dancers in abstracted environments that utilized color and texture to help tell my narrative. This allowed me to explore a variety of different materials, most of which I haven’t used before, such and carving foam, pouring plaster, mixing concrete, and working with silicone. At times it was a literal big mess, but I learned A LOT.

When I started the fellowship I had romantic ideas of how the whole thing would play out, but it wasn't too long into the project, when I finally forced myself to take pen and paper to a calendar, that I began to realize I would need to sprint in order to get everything done. I’m happy to say I did this, but I won’t be deceptive - I’m finished with the fellowship, but the project itself is still underway, with plans to be finished over the next two months. Word to the wise: either cut your idea in half, or double the amount of time you’ll spend on it - I guess I chose the latter.

My time at the Burns felt intense. I live in Brooklyn and figured I would just commute in. I quickly realized I was not cut out for the four hours a day it stole to commute up there and back. The Burns Film Center, true to being as accommodating and supportive as humanly possible, let me stay in their guesthouse while it was unoccupied. Eventually, when their real Artist-in-Residences came along I was fortunate enough to stay with friends of friends who lived nearby. Without being annoyingly sentimental, the amount of generosity I received was amazing and helped propel me. One night I was sitting eating pizza and watching the sun go down with Savanna who works in equipment and Gary Van Der Meer, the Head of Facilities (who helped me so much along the way). Savanna asked me where I would be right then if I wasn't at the Burns. I remember this because I was also thinking about it in that moment - I wasn't sure where I would be, but I was damn grateful that’s where I was :’-). I’m so thankful to the Burns community and especially to the people I have mentioned above, as well as Sean Weiner, the director of the Creative Culture initiative, producer of this project, and amazing friend, without whom none of this would have been possible, as well as Russ Peborde who helped me immensely with lighting, and a million other things!

We at the Burns have greatly benefitted from Ariel’s time here as a Sally Burns Shenkman Woman Filmmaker Fellow, and wish her all the best as she continues to hone her craft as a filmmaker! If you are interested in applying for Spring 2018 fellowship and maker opportunities through our Creative Culture initiative, please visit our our artist services page HERE to learn more and apply.