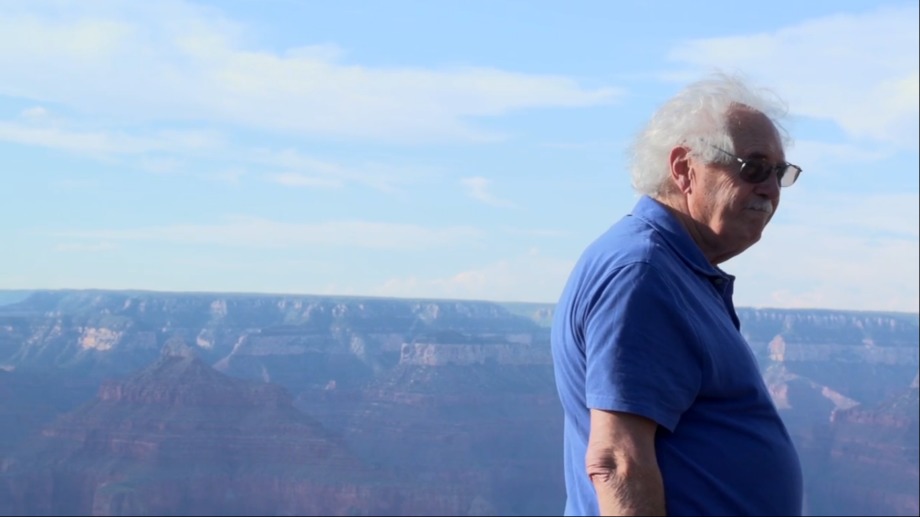 My fellowship began at the end of June, right after I returned home from a trip to the Grand Canyon with my sister and grandfather. My goal was to make a documentary about my grandfather using our trip as the underlying plot for the film. After hours of interviews with my grandpa and some unpredictable moments on the road, it was hard to know where and how to start constructing the film.

In my first week, Sean and I created a general calendar for the three months that I would spend as a fellow. We had weekly meetings scheduled with a plan for how to go about making initial scene constructions, dates for rough cuts, screenings, and time set aside to get any additional footage that I may need.

Various threads began to come together, some intentionally and some organically, to help tie together the different elements of my grandfather’s life that I wanted to weave into a coherent narrative. Understanding how my grandfather thinks and feels about the aging process was something that I wanted to articulate through the film. After reviewing the footage that I had gathered, it became clear that how my grandfather interacts with technology is very connected to how he copes with his loss of vision and getting older. I was able to focus on this connection by getting more footage of my grandpa at his house, using his iPad and speaking to Alexa, a voice-activated digital assistant.

When there were a few weeks left of my fellowship and I had a rough cut assembled, we organized a screening. We invited a few people to watch and give feedback, and it was incredibly helpful to get feedback from people who had not previously seen the film and brought fresh eyes and fresh perspectives to my work. One of the biggest challenges that came to light after the screening was how to incorporate myself into the film. While this project is highly personal, I had been so focused on trying to create a strong sense of my grandfather that I had ignored how people might interpret or understand my role as both filmmaker and granddaughter.

With Sean’s help, I was able to come up with a way of making my presence in the film more transparent without breaking the style and sentiment that I had worked hard to create throughout the piece. I decided to incorporate more archival family videos and photos to provide a greater sense of our family. I filmed a few interactions between me and my grandpa that helps to establish my role for the viewer.

By the end of the fellowship, I was picture locked. I am now working on the finishing touches and am excited to share the final product with the JBFC staff in the next few weeks. It’s an incredible feeling to have completed a project that I had been thinking about for so long. Sean’s constant mentorship throughout the fellowship allowed me to learn and grow so much as a filmmaker. The experience inspired new ideas, encouraged me to push myself, and helped me explore new opportunities.

We at the JBFC are so proud of everything Lucy has accomplished as our Summer 2016 Emerging Artist Fellow and look forward to seeing her work in the future.  Make sure to view and vote for her Sundance Ignite Fellowship submission, Grand Grand, here.

The Valentine and Clark Emerging Artist Fellowship is made possible thanks to the generous support of the Westchester Community Foundation, a nonprofit community endowment for the benefit of Westchester County.