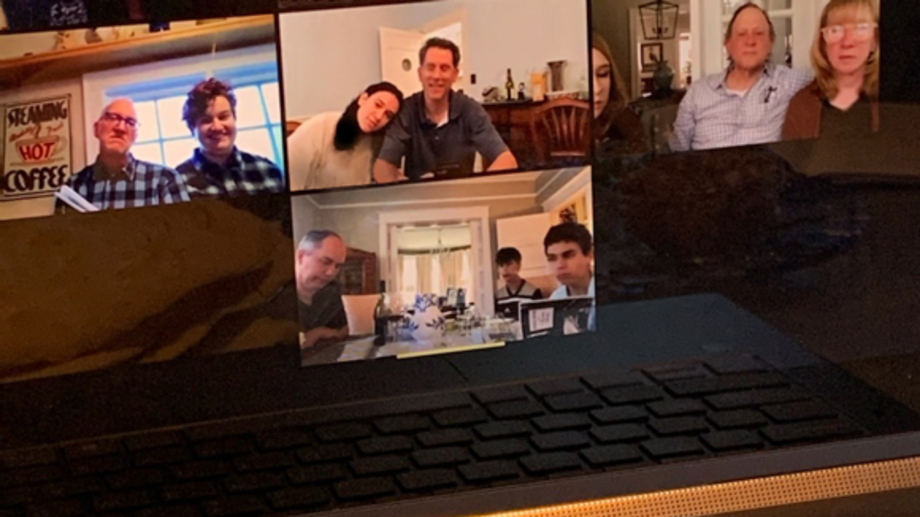 With Passover and Easter just around the corner, you may be thinking about ways to keep virtually connected to extended family and in particular, with elderly parents, grandparents and other older folks in your life who may be uncomfortable with the technology, devices and apps that many of us are using to connect with one another right now.

My parents live in the UK, and as I’m usually in the midst of teaching in April, it’s rare for me to be able to visit them in person at this time of year, even without the social distancing measures that are currently in place. For this reason, I began looking around to find them a device that would make video calling easier for them. I decided that an all-in-one device would likely be the simplest and trialed 2 of the most popular models.

It’s all about Connection: Video calling with an easy-to-use all in one-device.

The Amazon Echo Show includes Alexa and built-in video calling. It’s very easy to use since it’s voice-activated. To start a call from the Echo, the user just needs to say “Alexa, call …...”The user can turn off the video by saying “Video off” or by tapping the video button on the screen. However, I ultimately decided that this was not the best choice for my parents because the device only allows you to call people who are in your contacts and who have an Echo or the free Amazon Alexa app installed on their smartphone.

The Facebook Portal was the other all-in-one device I tried. It also features voice-activated calling and hang up options. One of its main selling points is the camera pans and zooms around the room, following the person you're talking to, which can be a boon if you are making the call as a group. It also integrates its video calls with Facebook-owned Whatsapp and Facebook Messenger, which are the apps that my siblings and I use to communicate from our smartphones.

Based on my research, I ordered my parents the Portal and we’ve had a wonderful, largely blip-free time staying in contact over the past few weeks.

For Sarah O’Hare, Interim Director of Education at the JBFC, keeping in touch with her family back home in Indiana, and connecting with her faith community in the run up to Easter, led her to explore Facebook Live. “Everyone in my family, myself included, has been attending church via Facebook Live. The church administration has been sending a link by email every week. As long as someone can open an email and click the link, they can attend the service. My mom’s pastor even had the congregation pass the peace (normally done by handshakes), by sending texts to loved ones.

Sending photos from a smartphone to an online-photo printing service such as Shutterfly, so that they can be mailed directly to older relatives, is another thing we are doing right now. Even a photograph as a text is a great way to connect with older members of my church family. They often can’t text back, but know how to open up texts containing photographs, so even just sending pictures to stay connected helps.”

“Why is this night different from all other nights?”: A virtual Seder using Zoom

For Hastings-on-Hudson resident and JBFC member, Ellen Dominus-Broude, the traditional Passover Seder celebration is a highlight of her family’s year. She has found a novel way of keeping the tradition alive this year using the video conferencing application, Zoom.

Ellen explained: “My parents are in their 80s and traditionally they host a Seder for the whole family at their home in Harrison. About 10 days ago, I realized we wouldn’t be able to get together in real life so I asked my dad if he’d heard of Zoom. He hadn’t, but was open to learning. We practiced with me setting up a “conference meeting” in Zoom and him clicking on an email link I sent him to open the video call. When I called over to my parents’ doorstep for a socially-distant grocery drop-off a few days later, I was touched to see my dad had left out our family’s 1950s copy of the Haggadah (the text recited at the Seder on the first two nights of the Jewish Passover). I am planning on sending a pdf copy of the text to my extended family so we can all come together on a Zoom call to share in reading the different parts of the story on the first night of Passover.

We are all going to have our own Seder plates in our different geographic locations, and we’ll all eat Matzo Ball soup, the only thing we’re still trying to work out is how we’re going to handle the part of the reading where the youngest kid searches for the Afikomen!” (a piece broken off from the matzo during a Seder and put aside to be eaten at the end of the meal. It is traditionally hidden during the Seder to be searched for by the children present).

I asked Ellen if there was any unexpected upside to having a socially-distant Seder this year and she commented, “Why yes there is, we are having extra guests –family friends from Vermont who wouldn’t usually be able to attend.” Ellen ended our chat on a remarkably upbeat note—“The Seder traditionally ends with the line: ‘Next year in Jerusalem’, but we’re changing it up this year to be ‘Next year in Harrison.’ “