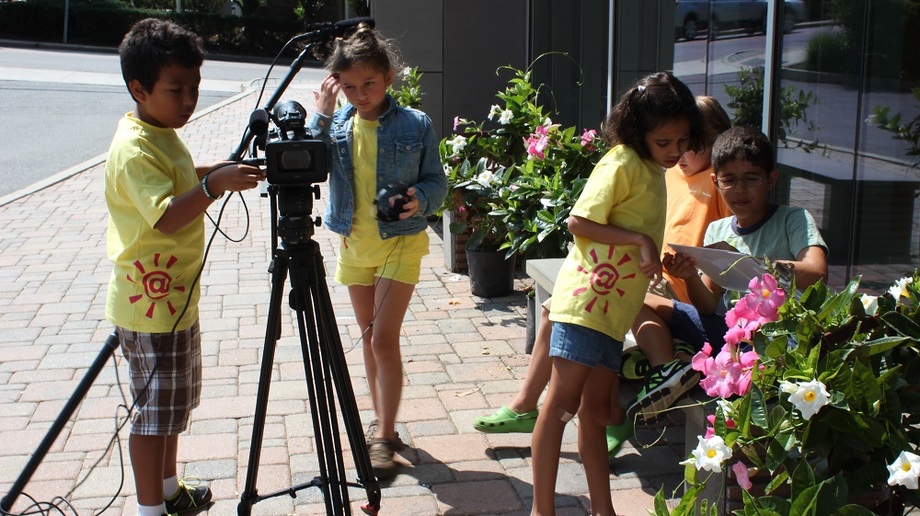 We started off this week with 38 new day campers and 20 Summer Co-op students! It is a full house! The 3 & 4 grade group is starting to make a fantastical film set in a haunted hotel. It includes unsuspecting guests, a creepy mad scientist, and plenty of green screen effects. JBFC full time faculty member, Darrel Swann, is making sure the kids think about Beginnings, Middles, Ends, capturing beautiful camera shots, and storyboarding out their ideas so they are all on the same page. They were joined by our acting teacher Mike Williams earlier in the week who starting teaching the kids about improv character acting; which they are using to craft their wild and terrifying performances. At the end of the week they are working with our sound specialist and musician, Michael Schneider, to delve into the art of Foley, adding aural details to create emotion!

JBFC full time faculty member Emily Ohara started the week off with her 5 & 6 graders in the animation studio! Greg Nemec, professional illustrator and JBFC faculty member, worked with Emily and her students to think deeply about the art of stop motion animation. Transformations were the theme of these few days. Objects morphed into names, kids walked through walls, and stop motion magic ruled the studio. They are finishing off this first week with an improv session with the previously mentioned Mike Williams and preproduction on a few short films.

The first day for the new group of David Miller’s 7 & 8 graders was steeped in hilarious evil comedy. Michael Schneider returned to show the kids how to create their very own radio drama. They created a call in talk show for evil villains to talk about their problems and even their successes. Beyond the creativity in the storytelling, they had to think about how to layer in sound textures and effects to create the feeling and mood of a villain radio show. They followed this up by 2 days of creating video games in pairs with camp director Aaron Mace. Students spent time talking about what is fun about games so that they could apply those ideas to the games that were made. Mike Williams was the man of the week, working with this group of students as well! The week was finished off with a visit from professional photographer and animator Greg Lewis. He asked the kids to think about stop motion animation in 3D space. Multiple planes of action one picture at a time!

Actor Mike Williams worked with every group this week. He spent the first day of camp working out the first day nerves of the 9 & 10 graders. They spent some time viewing film, however this group really focused on thinking about how embedding characters with unique objectives can make them come to life on screen. Summer faculty member Adam Lamas took them through filmmaking boot camp by giving them one day to plan, film, and edit action-packed chase scenes. The week wraps with every student getting a chance to design their very own 3D digital characters which they will bring into another project, animating these characters interacting with themselves in an underground secret laboratory.

This week also launched our Summer Co-op for high-school students course! It is taught by JBFC director of curriculum Brady Shoemaker and JBFC full time faculty member Sean Weiner. It was an intensive week of discussion, hands on activities and guest visits by cinematographer and JBFC equipment manager Justin Drobinski, writer and director Rob Morton, and actor Mike Williams. They were able to screen the feature films Moonrise Kingdom and The City of Lost Children to look explore modes of storytelling and filmmaking techniques.