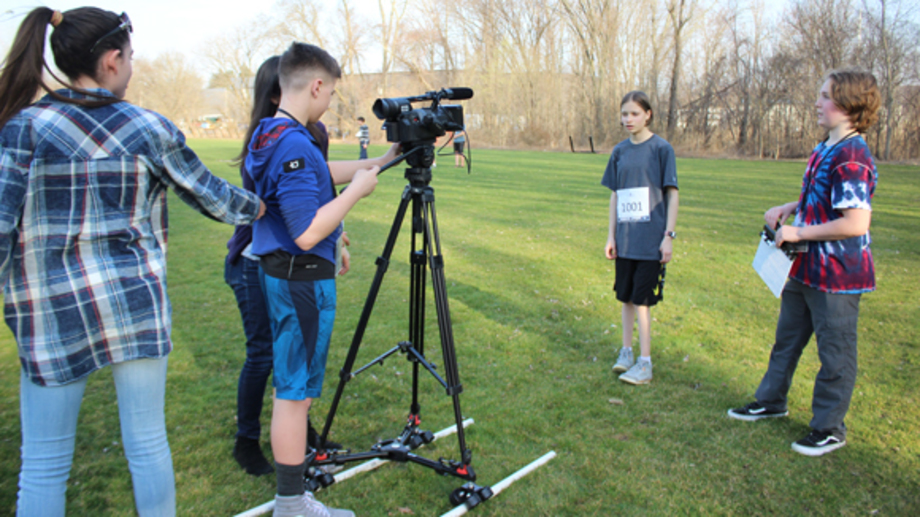 These rules are for every film challenge.

1. Film Challenges come out on a Friday. To enter the prize pool you MUST send us a working link to your film by the following Monday at 5 pm. Please send your video submissions to education@burnsfilmcenter.org.

3. Films must be “family friendly” to win the challenge. Nothing R-rated!

4. The prize is having your film featured on the JBFC Education YouTube channel (even a scholarship to an upcoming course, free movie tickets, or snacks at the JBFC)!

The Neilson-Papish family keep the crown!!! Congratulations to Clara, Zachary, and Eli on their film! Can anyone take the crown from the Neilson-Papish’s?! All the entries were really well done, so thank you to all the filmmakers for their hard work! Watch their film on the JBFC Education YouTube channel starting next week.

IMAGE: A graphic match is a way to connect two shots by having similar composition in each. Check out our visual glossary (linked above) for some ideas, or look at the examples below. Use at least 1 graphic match in your film.

STORY: Someone in your house is not who they seem to be!

The “ticking clock” is one of the most common ways filmmakers drive the story forward: “We need to get to Dallas by Tuesday!” “You have 20 minutes until the bomb goes off!” “If we don’t get home by midnight, our carriage turns back into a pumpkin!” Adding these sorts of deadlines can make it easy for the audience to understand the urgency of a character’s problems. Try using a ticking clock in your story to drive the action.