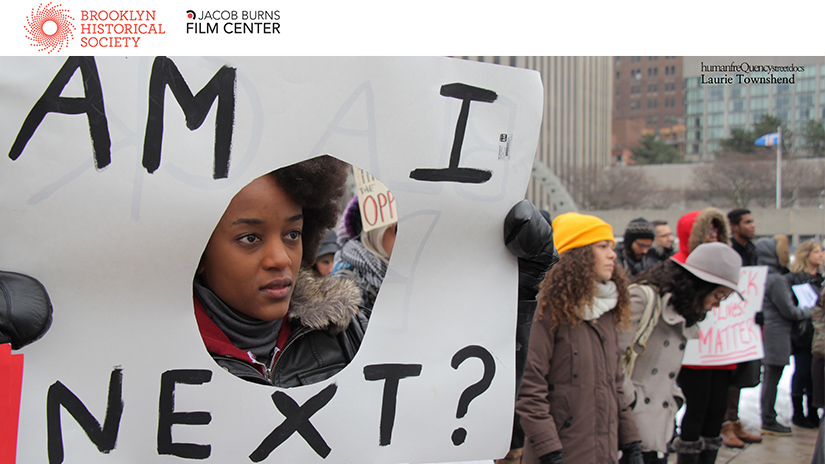 Created Equal: Image, Sound, Story is an interdisciplinary curriculum and professional development program supported by the National Endowment for the Humanities. The program aims to enhance the teaching of the Civil Rights era in middle school classrooms through integrating a history and media arts pedagogy that provides teachers with resonant primary media sources from the 1960s and the present. The Brooklyn Historical Society (BHS) and the Jacob Burns Film Center (JBFC) collaboratively designed this program, which provides in-depth interaction with leading scholars, hands-on training in the project’s digital curriculum, and classroom support as teachers implement the lesson plans with students. The program is designed to inspire young people to learn the history of a seminal moment in the Civil Rights movement in America, understand the power of people and the media to advance social change, and share their own story about racial justice through the creation of multimedia arts projects. Students will be empowered as historians, storytellers, media makers, and social activists as they grow to understand how the past and the present are connected, shaped, and shared.

The Created Equal curriculum uses Stanley Nelson’s documentary film "Freedom Riders" as a jumping off point for students to make connections between contemporary and 1960s-era Civil Rights activists. As they juxtapose current events with a study of the goals, tactics, and strategies of 1960s-era activists throughout the American South and in Northern cities, students will gain an understanding of the broader context of the Black Freedom Movement in America. Along the way, students will build skills working with primary sources related to the Brooklyn chapter of the Congress of Racial Equality (CORE), and critically engage with contemporary media. Students will focus particularly on the struggle against school segregation in Brooklyn in 1963 and the New York City Schools Boycott in 1964 and continually reflect upon answering the question: "The story of Civil Rights is my story because..." The curriculum provides opportunities for students to create video, audio, photos, and a short documentary film and to develop critical thinking through discussion, reflection, and writing.

As media arts education partner, JBFC draws on its mission to equip and inspire students of all ages to become active viewers and inspired creators of visual media.  BHS’s vision for student-as-historian programming and experience bringing school teachers and historians together complements and enhances JBFC’s approach for this Civil Rights-focused project. BHS’s archival primary sources from the Brooklyn chapter of the Congress of Racial Equality (CORE) include photographs, flyers, internal memos, and press releases related to 1960s activism. These deeply resonant, approachable sources are paired with critical thinking strategies and context, to help students learn how to learn from them. Leading scholars of 20th century African American history and activism, Brian Purnell and Cornelius Bynum as well as the award-winning filmmaker, Stanley Nelson also contributed context and messages to the students which appear in the curriculum as video excerpts.

In the spring of 2016, seven teachers at three schools (Roosevelt School, Bridgeport, CT; East Flatbush Community Research School, NY; and Ebbets Field Middle School, NY) were part of the pilot initiative of Created Equal: Image, Sound, Story. In year three, during the spring of 2018, teachers from two schools in Brooklyn and one school in Mt. Vernon will participate in the program. The Brooklyn schools were selected through their participation in Turnaround Arts, a program of The Kennedy Center, in partnership with the President's Committee on the Arts and Humanities.

NATIONAL ENDOWMENT FOR THE HUMANITIES

This curriculum was made possible in part by the National Endowment for the Humanities: Exploring the human endeavor through funding in 2017.

Any views, findings, conclusions, or recommendations expressed in this web curriculum, do not necessarily represent those of the National Endowment for the Humanities.

The Jacob Burns Film Center, a dynamic nonprofit educational and cultural organization in Pleasantville, NY. At our five-screen Theater- one of the most successful suburban art houses in the country- we present the best of independent, documentary, and world cinema, along with an exciting roster of special guests. Across the street, the Media Arts Lab is the hub of our education mission to develop and implement programs that provide instruction and inspiration in media-making and communication for a visually, digitally, and globally connected world. With these two state-of-the-art facilities and a Residence for Filmmakers, the JBFC campus provides countless opportunities for dialogue and community engagement.

Each year, over 200,000 people come through our doors to see more than 400 different films and 13,000 students participate in our education programs every year. More than half come from underserved communities, and their participation—including transportation—is funded entirely by the JBFC, thanks in part to support from individuals, foundations, and corporations.

Founded in 1863, Brooklyn Historical Society (BHS) is a nationally recognized urban history center dedicated to preserving and encouraging the study of Brooklyn's extraordinary and complex history. BHS is a vibrant museum, a world-renowned archives and special collections library, a cutting-edge education center, and a hub for community dialogue. BHS’s headquarters are located in a landmark 1881 building in Brooklyn Heights designed by architect George Browne Post. In 2017, BHS will open its first permanent satellite space in the historic Empire Stores complex on the Brooklyn waterfront, positioning the institution to offer even more opportunities for residents, visitors from around the world, and online audiences to learn about the borough’s past, present, and future.

Based in Brooklyn – an historic hub for immigration and migration that is currently home to approximately 2.6 million people – BHS’s collections, exhibitions, educational offerings, and public programs, reach a diverse audience of over 250,000 people annually, including nearly 15,000 students and teachers. BHS’s suggested admission policy and free or affordable public programs, education programs, and online resources results in little to no barriers to people with financial limitations.

Created Equal is comprised of:

After completing all of the units, lessons, and projects in Created Equal, students will be able to: