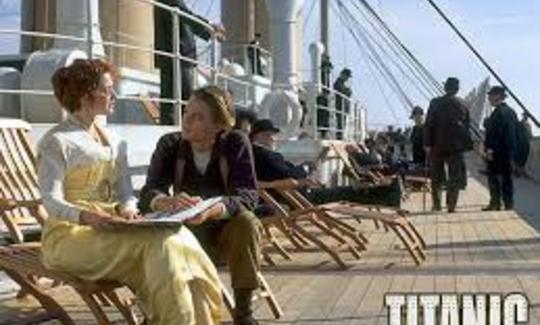 I can't think of a single thing that is unappealing about this movie, Titanic. Whether you like action and adventure, romance, comedy, or drama, this movie has virtually everything. What I love about the film's style is... EVERYTHING. The costumes/make-up attract your eye, even though that kind of costume has not been worn in our culture for quite some time. The costumes that Rose wears radiate elegance and sophistication. The normal clothes Jack wears really represents the separation between his class and hers. The tuxedo he wears at dinner depicts what a person is really capable of. It depicts the possibility and reality of a bridge between the two classes of people, despite the cultural idea of the opposite back then. The overall style of the film also represents this class system. The romance between Rose and Jack, the irony of Rose's fiancé committing suicide due to his unhappiness (even though he was rich!), the pick and choose of who went in the little boats first when Titanic was sinking, and the sadness of all the lives lost in the sinking of it show an amazing style of film that the world had never seen before at the time it came out (1997).