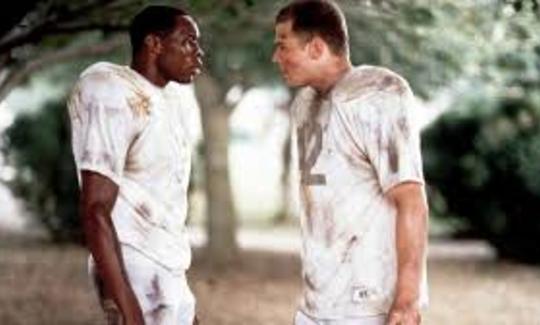 This picture, illustrating the racial tension between Julius and Gerry from the motion picture hit "Remember the Titans", is taken after the football team has had three practices a day for the last couple of days during camp. It was their jobs to learn something new about each other, so to put an end to the nonstop practicing, they learn about their families, while also taking shots at each other as players and as counterparts. The fact that this film shows how the racial divide was solved by this football team, is truly presented in this shot as passion, anger, and emotion is shown through this still shot. This movie is one of brotherhood, showing many people the way in which opposite races should throw away their differences and fight for the same cause, that of equality.