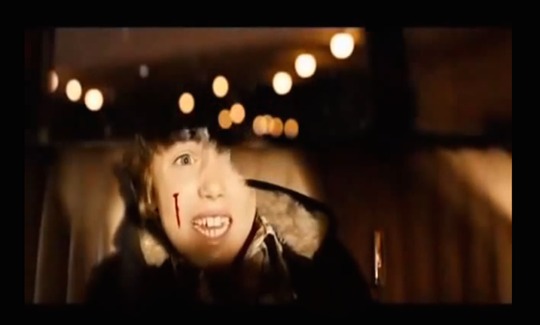 I decided to choose The Time Traveler’s Wife because I think the postproduction is amazing in this film. I love this film because it has such a dynamic storyline. It was so creative and powerful. The scene that I uploaded was from the car accident scene as Henry starts to dissolving which indicates that he is time traveling.This is just one specific scene from the movie but it illustrates why it is so unique. It begins with little Henry and his mother inside the car in front of the store. The camera is facing the front window while the windshield wipers are going back and forth. This scene has a powerful sweetening effect with a ton of sound effects and one of them was used with the windshield wipers. It is minor but adds a realistic outlook on the scene. The camera then smoothly jump cuts to a close up of little Henry looking outside the window in excitement. In the background, you can hear another sound effect, which is the Santa outside ringing the jingle bells. At this part of the scene, little Henry and his mother started singing jingle bells as the car the pulls away, the same time the camera jump cuts to a wider camera view. The sound of the cars driving in the background volume increases. The camera then cuts to an interesting sky view, which illustrates the top of the car driving on the street. This scene has more of a sepia effect since the lighting is so dimmed. The camera then smoothly transitions to the side of the car where it rolls from the back seat where little Henry is sitting to the front where his mother is driving. They are both still singing. It then jump cuts to little Henry looking puzzled and cuts to the front of the car where a truck is coming towards them. At this time, another sound effect is used. You can hear the truck ahead of them swerving back and front. The viewer can also see the bright headlights flashing as well. You hear the short slam on the breaks and the camera jump cuts to the back of the car, where you see little Henry hitting his head on the back seat. The car then swerves and in the quick instant, the camera rough cuts to a top view where you can see the two cars collide while still swerving. While all of this is occurring, the sound effects are amazing. It feels like you are in the car during this scene. The camera cuts back to little Henry as he starts to bleed on his face. He looks at his hand and then the camera flips back and forth to in front of his hand and to the back of his hand. This is the part that is amazing because his hand begins to disappear and dissolve. During this shoot view, you can see his concerned mother and what is in front of the car as well. The camera begins to jump back and front. As little Henry is dissolving, you can see the truck coming right towards their car. The headlights start to get brighter and brighter and his mother is still facing towards the back. Right before the truck hits the car and you can hear the harsh slam on the brakes, there is a huge jump cut into a flashback. This transition was so amazing and smooth at the same time. It was the perfect time to cutaway. The camera is facing a frightening little Henry perplexed about what just happened. The camera then flips to the view that little Henry has at this very moment. It is looking into the window of little Henry with reading with his parents, 2 weeks prior. Little Henry looks back and sees a bright light and then it jumps cuts to little Henry being inside the house while this is occurring. In the background, he is breathing really hard and you can still hear the conversation that happened 2 weeks ago. During this time, a piece of music is playing, which enhances the scene. It also brings a sense of suspense to the audience. The audience begins to ask, “What will happen next?” It cuts to a frightened little Henry again breathing hard and he covers his eyes. The camera begins to zoom out and then little Henry slowly disappears again. The camera then jump cuts with a unique cross dissolve. Instead of the whole shoot dissolving, little Henry dissolves and then reappears slowly. His eyes are still covered. He lowers his hands and in the background, you can hear the loud engine coming closer and as he turns around, the trucks strikes pass right behind him. Then the truck drives towards the car but then the camera flashes back to what happened before he first began to disappear. With his mom facing the back seat confused. Then the camera goes back to little Henry’s view and we see the actual crash finally. There was a huge sound effect hear and zoom into the fire from the crash. Little Henry screams “Mommy”. Older Henry appears out of nowhere and tries to calm little Henry down. He explains what occurred and then the camera flips back and forth to both Henry’s. The camera then zooms into their faces, the suspenseful soundtrack begins to play again, and you can hear the background bystanders who witnessed the accident. The camera then goes back to little Henry and shows Older Henry’s clothes on the ground. So much happened in this short scene, which duration is about two minutes and seven seconds. The motif of time traveling definitely was evident in this scene.